We have some great news for you!
Why don’t you become a CL100 Member in order to get more benefits?
All new and existing Club Members are entitled now to purchase Zepter products with additional discount!

The rule is simple: add chosen product(s) to shopping cart and let us do the rest!
Based on added products’ RRP Prices the RRP Total Price will be calculated for your order. If RRP Total Price is:

Enjoy shopping with us at privileged prices!
ClubLive100 is your ticket to the Zepter world of health, beauty and business opportunities.
Live better, live longer!

We have some great news for you!
Why don’t you become a CL100 Member in order to get more benefits?
All new and existing Club Members are entitled now to purchase Zepter products with additional discount!

The rule is simple: add chosen product(s) to shopping cart and let us do the rest!
Based on added products’ RRP Prices the RRP Total Price will be calculated for your order. If RRP Total Price is:

Enjoy shopping with us at privileged prices!
ClubLive100 is your ticket to the Zepter world of health, beauty and business opportunities.
Live better, live longer! 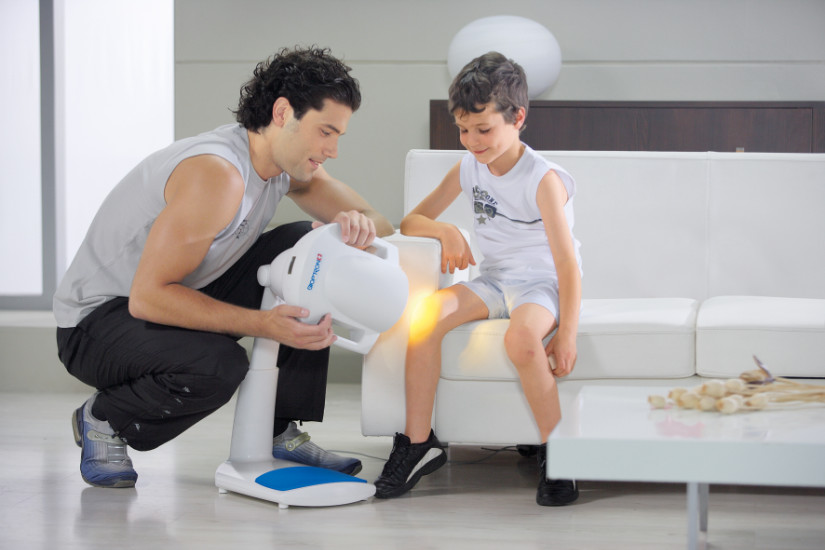 Hyperlight’s energy-information manipulates energy in the segments where the energy is congested or completely blocked. As a result, it is freeing the energy-stagnations and rejuvenating the body on the quantum level. Therefore, Hyperlight can be seen as bio-regenerative therapy: it restores the subtle energy fields, bringing the entire body’s system back to homeostasis (natural healthy state).

Everything that exists including crystals, plants, animals, and humans is sustained by atoms that emit radiation and energy. Every cell in the body emits more than 100,000 photon-impulses per second which are responsible for maintaining health. Human cells, tissues and organs radiate energy and light (mostly infrared radiation, which is electromagnetic radiation with a frequency lower than visible light). Therefore, General Medicine cannot tend to reduce human bodies anatomy down to a simplified version that consists of only flesh, bones and blood:

We are "pulsating light-beings” whose energy (from the atomic to the molecular level), is continuously in motion. This facet is imperative for understanding how the body’s "vital energy” directs and maintains human health.

In Traditional Medicine TM, vital energy (qi or ch’i) is described as a vital force forming part of any living entity. Qi translates literally as "air” and figuratively as "material energy”, "life force”, or "energy flow”. Qi is the central underlying principle in Chinese and Ayurvedic Traditional Medicine. Qi is a vital force, the flow of which must be unimpeded for health.

When the so-called "vital-energy” flows freely, the body is in a state of coherence (healthy condition).

In contrast, if the vital-energy flow is disrupted, the body is in a state of incoherence (unhealthy condition). If the energy in one organ is disproportional, the rest of the organs are negatively influenced, and in a domino effect, the health-system is gradually collapsing.

The incoherent state can be identified with the quantum diagnostic device Veda Pulse. It is the apparatus based on the Heart Rate Variability HRV analysis method, recognized by the European Society of Cardiology and North American Society of Pacing and Electrophysiology.

By registering the biopotentials generated in the heart and performing HRV mathematical analyses, Veda Pulse detects the rhythm and energy of organs, meridians, regulation systems, and other vital parameters. The software portraits the energy fluctuations and stagnations in the entire bio system.

The energy stagnations in the organs can be restored with Quantum Hyperlight therapy.

Dr. Đuro Koruga in his book "Hyperpolarized light”, comprehends Quantum Hyperlight’s physical characteristics and its positive effects on bio-structures. According to Dr. Koruga, there are three characteristic peaks: 5811 nm (0.0133 eV), 8732 nm (0.0268 eV), and 13300 nm (0.0181 eV) which have a significant influence on the quantum state of biological structures (conformational state of biomolecules).

Quantum Hyperlight possesses the same type of symmetry (energy-structure) as human biostructures. Through light-matter interactions and the resonance principles of biomimicry, Quantum Hyperlight, which is a superior bio-resonator (constant perfect structure),imposes its energetic and informational properties onto the disturbed incoherent biostructures, bringing them back to their natural and healthy state of coherence.

Traditional Medicine describes biologically active zones (which lie along meridians in the body) as invisible channels, where the "vital-energy” flows.

The 12 major meridians connect networks of 12 organs, organizing a system of communication throughout the body.

Hyperlight’s energy-information manipulates energy in the segments where the energy is congested or completely blocked. As a result, it is freeing the energy-stagnations and rejuvenating the body on the quantum level.

Based on the quantum diagnostics results by Veda Pulse (functional body-state analyses), a noticeable positive effect on health is revealed, which is characterized by the energy harmonization in the biologically active zones that had previously an energy deficit. The BIOPTRON Veda Pulse experiment concludes: energy is transmitted exactly in the areas where there was an energy-deficit.

Since disease starts first as a "energy stagnation”, before the body shows any symptoms, Hyperlight is advisable to be used as a prophylaxis treatment.

After 10 minutes of Bioptron Hyperlight exposure, the result is significant. From 9 imbalanced
systems even in 6 systems is the energy revived and restored.

Renowned scientist Sir Roger Penrose (Nobel Prize Laureate in Physics in 2020), in his book “Shadows of the mind”, comprehends the research of Dr. Đuro Koruga: Understanding the geometry in bio-systems, we can decode and biohack our biology!

1. Biostructure rejuvenation: stimulation of the regenerative and reparative processes in biological structures. Red blood cells and MICROTUBULES (tubular structures inside eukaryotic cells - part of the cytoskeleton that plays a role in determining the Torus cell’s shape) are reshaped into their previous original torus shape - an ideal healthy cell condition and cell formation.

3. Improved oxygenation (supplies oxygen to tissues): red blood cells play a crucial role in the human body for their prolific ability to transport oxygen to different tissues. "A human red blood cell is a dimpled ballerina, ceaselessly spinning, tumbling, bending, and squeezing through openings narrower than its width to dispense life-giving oxygen to every corner of the body.” (UCSD researchers, Annals of Biomedical Engineering)

4. Promoted cell biostimulation at the quantum level, and in this way improves the body’s defense system.

Red blood cells are clotted, unordered and inactive (clustered structures), which could reveal (or lead) to cardiovascular diseases, inflammations and oxygen deficiency at the tissue level (hypoxia).

BIOPTRON® Quantum Hyperlight can rejuvenate unhealthy cells and recreate vigorous energized, healthy red blood cells and microtubules (an ideal healthy cell condition and cell formation), all of which are critical to maintain a healthy body.

As microtubules are influenced by Hyperlight, does such light have an impact on our consciousness as well?

THE IMPORTANCE OF ELECTROMAGNETISM AND WATER FOR ULTIMATE WELLBEING

Humans are EM nature, sustained by water. Whilst the human body is made up of 70% water, at a molecular level, human bodies are more than 99% water!

Water conducts the electricity in the body. The biological structures are supplied with additional electrons (energy) and information, which is transmitted through the hydrogen water bond chain. Therefore, water is alive. And does it have the memory, because the information remains in the body?... Even after some days after being influenced by outside factors. The concept of the memory of water goes back to 1988 when Professor Jacques Benveniste claims that extremely high ‘ultramolecular’ dilutions of an antibody had effects in the human basophil degranulation test, a laboratory model of immune response. In other words, the water diluent ‘remembered’ the antibody long after it was gone. Concept of hydrogen bonds in water, an attraction between two atoms that already participate in other chemical bonds. Hydrogen bonds form between neighboring water molecules when the hydrogen of one atom comes between the oxygen atoms of its own molecule and that of its neighbor. This happens because the hydrogen atom is attracted to both its own oxygen and other oxygen atoms that come close enough. A consequence of hydrogen bonding is that hydrogen bonds tend to arrange in a tetrahedron around each water molecule, leading to the well-known hexagonal crystal structure of snowflakes. These bonds are the primary reason water displays such interesting and unusual chemical properties, many of which aren’t found in any other chemical substance.

● The hexagonal body water structure (structured water) is preferred by all biological organisms. Structured water is involved in the healthy functioning of the DNA, enzyme reactions and numerous metabolic processes, it’s essentially the main carrier of all the electric signals that bodies generate. Water is unswervingly involved in the optimal functionality of all the physical and mental functions. Water is central to every function of the cell - whether it’s muscle contraction, cells dividing, or nerves conducting.

● More energy from stronger mitochondria- Structured water delivers electrons to the mitochondria, and aids in generating more energy to the cells/ body.

● Anti-aging - Structured water acts as an antioxidant, protecting the cells from free radicals and slowing down cellular aging.

● Protein folding - Structured water binds to proteins and can deliver the energy they need to recover. BIOPTRON performed an experiment at the Dr. Masaru Emoto Institute in Japan, proving Bioptron Hyperlight creates „Hexagonal Structured Water which has a vital role for the human body”:

1. Tap-water crystal (molecule) is irregular, incoherent – unstructured, representing ‘molecular incoherence’, meaning that it is not symmetric to the body water.

2. Emoto’s experiment reveals that when tap-water is exposed to BIOPTRON® Quantum Hyperlight, it affects the water structure, modifying it into a hexagonal water shape crystal that represents the ultimate state of ‘molecular coherence’.

"BIOPTRON made an experiment in our Masaru Emoto laboratory in Tokyo:

…Humans resonate with the dynamic harmonic field of the cosmos, and if our body-water is in harmony with the cosmos, then we feel good, we are healthy and everything feels good.

As well as helping to keep us alive and healthy, drinking the right volume of healthy Quantum Hyperlight water can be beneficial to help improve athletic performance, aid cognitive function and boost a person’s mood.

In analogy to the Masaru Emoto experiment, a healthy Structured body water is created in the body cells and organ - by 10 minutes of exposure to Bioptron Quantum Hyperlight.

And, in the end, just to remind you: "Lifestyle is the medicine!”

Veda Pulse, Darkfield microscopy, and Emoto experiments have revealed that BIOPTRON QUANTUM HYPERLIGHT can positively influence the human body on the quantum level!

Since disease starts as an “energy stagnation” even before the body shows any symptoms, it is advisable for everyone to integrate into a daily life program ``exposure to Quantum Hyperlight`` and receive a daily dose of healthy light! … to diminish the possible energy stagnations, and maintain a healthy body:

This website uses "cookies", which serve to make our internet presence overall user friendly, effective and safer for example when it comes to speed up the navigation on our website and measure the frequency of page views and overall navigation. Cookies are small text files that are stored on your computer system, so that you can use all the features of our online shop optimally. We explicitly point out that some of these cookies are transferred from our server to your computer system - "session cookies". These cookies are automatically deleted at the end of the browser session from your hard drive Privacy Policy.